A guilty pleasure of my life (and a benefit to living in a big city) is that of food trucks. My God do I love them. What’s not to like about a mobile restaurant that parks outside your work once a week? In fact, I love them so much I appeared as a customer in a clearly-not-staged photo for the Baltimore Sun talking about food trucks. 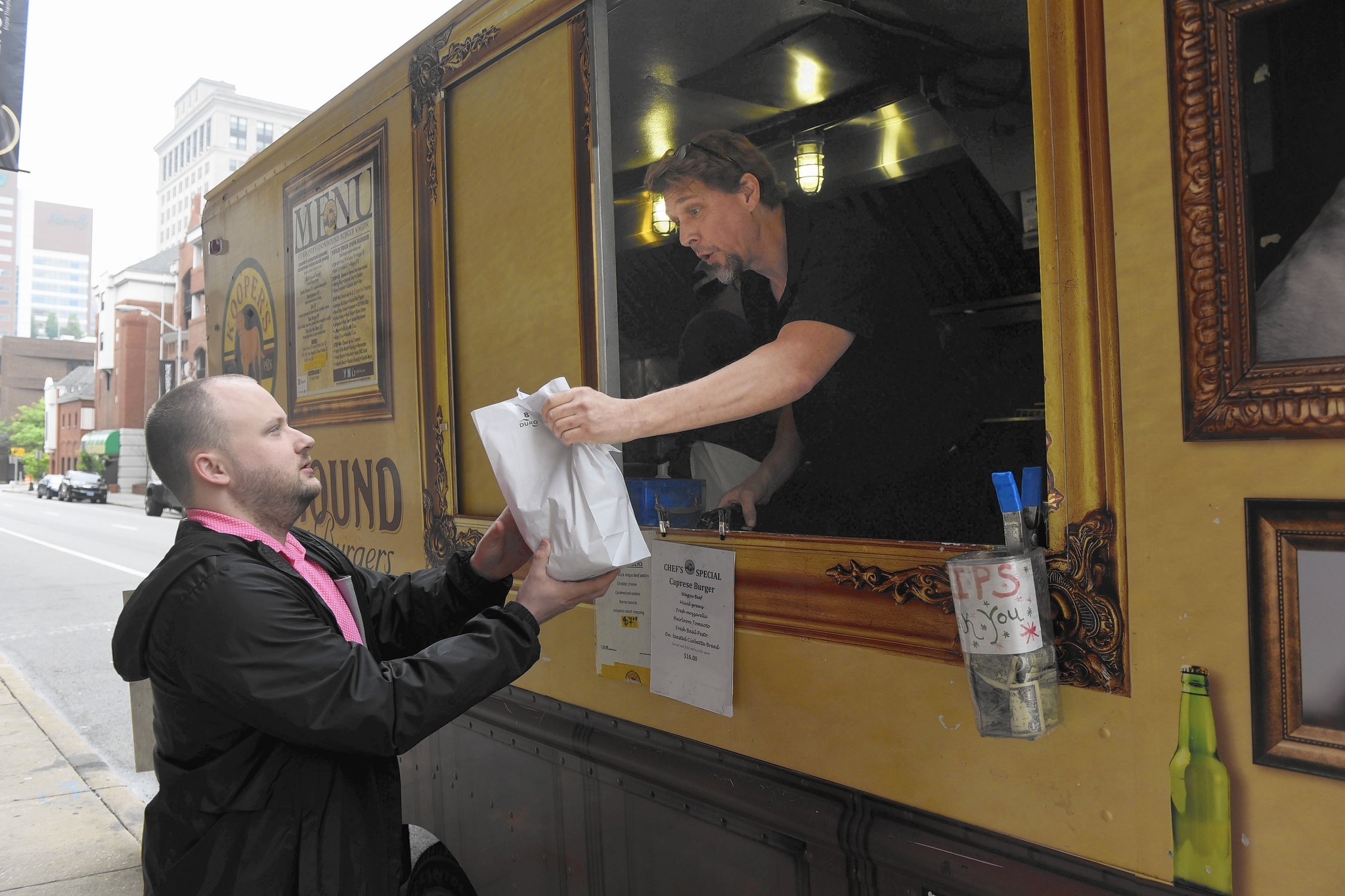 Needless to say, when I found out about a small box game that had a central theme of running your own food truck, I was stoked to give it a try.

Food Truck Champion from Daily Magic Games is a two- to five-player game where players act as the owners of competing food trucks. Similar to the Tiny Epic franchise, Food Truck Champion packs a lot of game into a small box and that’s mainly due to the design mechanism of the cards.

Each card in the game can be used in one of three ways. When read horizontally, the center of the card as the order ticket that players will attempt to prepare. These orders will feature the items needed to craft the menu item displayed.

The bottom of each card shows an ingredient which can be used to prepare the orders previously mentioned.

The top of each card will show which staff action can be taken. These actions allow players to shuffle cards around their player mat and add items from the marketplace, among other things.

The core game play and mechanics of Food Truck Champion rests with the functionality of these cards as players can only choose one of the three actions to utilize. It’s really quite clever and offers more depth than you would imagine from the size of the box.

In addition to crafting orders, players will try to complete their signature dishes that align with the food truck they chose to start the game. This gives each card another dimension of importance that will vary from player to player. One player may try to grab all the Mexican cuisine that they can as that aligns with their Tacos De Muerte food truck. Each completed order will net them a bonus point. But other players might also dabble in the burrito game as they don’t want to give free points to the competition. There’s also each food trucks flavor profile which is four ingredients that they are known for and will be critiqued on. Completing such dishes will net even more bonus points at the end of the game.

Food Truck Champion follows the path of most games where a player will choose a card and play it, picking the option they want to utilize. However, when a staff action is chosen, that gives the other players around the table the opportunity to also perform an action. This creates a quasi-engine building aspect to the game. This mechanic adds a strategic backdrop to what might appear to be a simple set collection game as players will try to maximize the uses of their staff based on what their opponents are doing. On the inverse, players may play staff roles that are only marginally beneficial to themselves so as not to benefit their opponents. This game, depending on how players want to play it, can include hate drafting and the covering of essential cards on purpose.

Food Truck Champion will combine set collection, engine building, and pick-up-and-deliver as players will need to move the cards around their food truck to complete orders. Every point gained from completing orders is considered popularity and the player with the most popularity when the game ends and final scoring concludes is the victor.

What Food Truck Champion does right is pack a lot of game into a small box. More importantly, it’s a lot of game with a few amount of components as the game basically boils down to ninety-five cards, player boards, and some tokens.

That doesn’t mean that Food Truck Champion is a slam dunk necessarily. The game asks for players to place cards under their player boards but in actuality, this doesn’t work and it’s better to leave items to the side. This will increase the footprint of the game quite a bit though.

The wooden popularity tokens are completely unnecessary. I don’t own the Kickstarter backed edition but in looking at the stretch goals, I am absolutely flabbergasted that wooden tokens were a stretch goal over upgrading the stock of the cards.

The theme for the game shines through in all regards except for one: letting players follow your lead when playing a staff action. I cannot think of a thematic reason that a chef in another truck would start prepping food just because they saw a chef in a rival truck do it. This is undoubtedly nitpicky but it took us out of the immersion of the game and made us realize the other faults.

Food Truck Champion does not invoke any social interaction whatsoever. Players are rarely if ever given a reason to converse with another except for when a staff action is chosen and players need to speak it out loud. Entire games can be played where players do not interact with one another socially. The game can feature heavy negative player interaction as players can actively swipe cards that are wanted by others and play actions that don’t benefit other players.

Despite the flavorful artwork and name, I believe Food Truck Champion is more for gamers than it is for an introductory crowd. If you’re into much heavier fare, Food Truck Champion won’t appeal to you but based off box art, you would think that this aligns with the Ticket to Ride and Splendor’s of the world when in reality it’s much meaner and complex than meets the eye.

The game plays two- to five-players. At two, a dummy player is needed to draw a card and honestly, the game is basically solitaire at two. I would avoid. Four- and five-player counts make the game overly long (easily past an hour) and it just sucks any and all enjoyment from the game as it overstays its welcome. It also hurts that the cards are changing so often due to the higher player count that players are forced to think more on the fly. Nothing wrong with that but it can draw out games as players take their time to make decisions. I personally feel like three players (or four if everyone is familiar with the game) is the sweet spot as the game should clock in under an hour and provide all players the opportunity to target one another. It’s hard to play the role of kingmaker in this game so players won’t have a reason or true ability to target one player in particularly.

I loved the artwork and the idea of Food Truck Champion but as most of my games are two-player, this fell flat. When we do have groups over, we tend to either pick a larger game to occupy or night or want to run through several smaller ones. Food Truck Champion did not stand out against those established games.

The last thing I want to talk about regarding Food Truck Champion is the dog. This dog looks like it’s haunting my dreams.